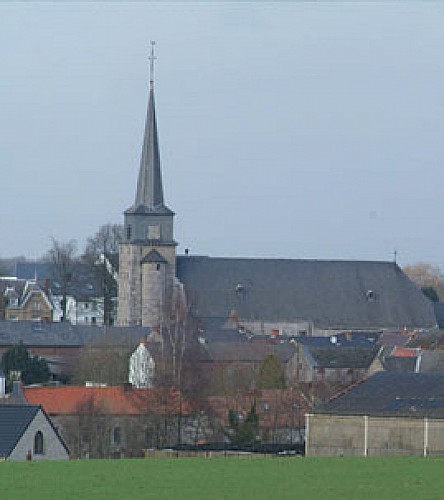 The church of Saints-Michel-et-Rolende is located on a fortified mediaeval site. Built from limestone, the church is dedicated to the worship of St Rolende and the archangel St Michael, patron saints of the building. The church is made up of a tower dating from the turn of the 16th and 17th centuries, a nave with three aisles, a massive unprominent transept and a narrow, semi-hexagonal chancel. The nave and transept each have three bays. The building has a hipped bâtière roof on a moulded cornice.

The tomb of St Rolende was the reason for the church being built. It was constructed in various phases from the 8th century onwards. From the pre-Romanesque phase there still remains the crypt, which dates from the 11th century, rediscovered in the middle of the 20th century. The tower and stair turret (south side) are Romanesque (12th century), modified in the 14th century. In the 16th century, the mediaeval church disappeared and a new structure built. The nave and side aisles were restored in 1615 and 1712. In 1770, the Gothic chancel was demolished, and two bays were added to the crossing and the arms of the transept. The church was restored during the second half of the 20th century by the architect S. Brigode. As part of this restoration a new walkway on two levels was installed.

The façade of the massive tower is enclosed by corner chains and was  restored in the 18th and 20th centuries. The square base of the tower is supported by a cornice on modillions and consists of a slate spire. The stair turret features arrow slits. Its base is made up of limestone support blocks and a chamfered plinth. It is topped with a cornice similar to the tower and a semi-conical roof.