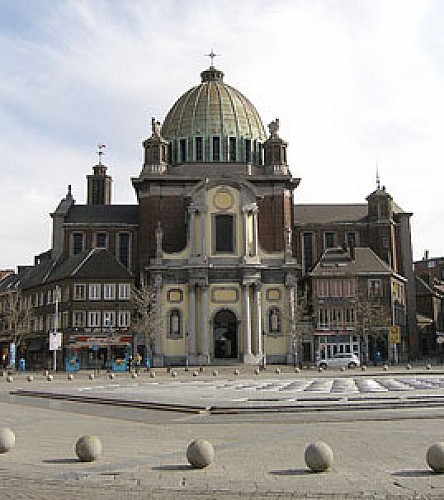 St Christopher's church is an 18th-century Baroque building located in the heart of the town. Today, it is cruciform in shape and its façade is typically Baroque. Between 1955 and 1957, the architect J. André modified the church. Of the original 18th-century building there remains the the chancel with flat chevet (dating from 1722-1723) and part of the nave (built between 1778 and 1781 by the architect Flavion). The façade was restored in 1863 by the architect A. Cador and is an example of a clearly Baroque clad façade, which means it is very energetic and features many reliefs (two twin column registers framing windows, niches and moulded panels; two isolated columns marking the corners of the building; offset entablatures; arched pediment; curved gable). The whole is decorated with the flame vase finials that are characteristic of Baroque architecture.

The church roof is hipped and furred.  The crossing between the nave and the transversal aisle is defined by a dome with an octagonal base. The corners have pinnacles featuring symbols of the evangelists.

The nave is made up of six bays, two of which still date from the 18th century. It has a vaulted roof, while the chancel has a quarter-round stuccoed ceiling. The chancel is surrounded by annexes and its chevet is adorned by an arched niche in an entablature with crooks, scrolls and pinnacles, topped by an arched pediment below a flame vase finial. The transversal nave has a coffered ceiling and features contemporary paintings and mosaics. This work by Jean Ransy gives the building a Byzantine feel and represents the Apocalypse of St John. Note the frescoes depicting the Beatitudes, the stained-glass windows, the organ and the rose window in the choir screen.