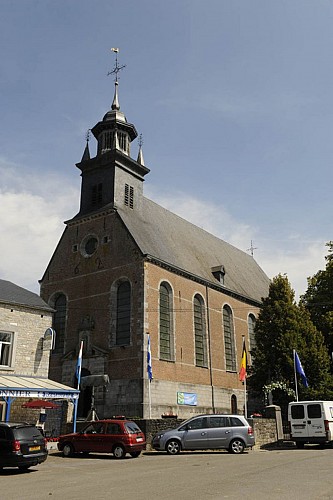 The church of Foy-Notre-Dame was built on a site famous for its pilgrimage since the 17th century. In 1609, a woodsman found a statuette of the Virgin in an oak tree close to the "smallholding of Foy". From 1616 to 1617 a series of miracles occurred that were recognised by the Church and there was a pilgrimage to Notre-Dame de Foy.

The initial chapel was built in 1618, replaced in 1624 by the current church. The pilgrimage subsequently led to the creation of processions with routes punctuated by milestones.

The façade is decorated with an arched door with bosses. It is flanked by pilasters supporting an ancient entablature and a pediment. In its centre, the door has a Renaissance niche that houses a copy of the statue of Notre-Dame de Foy (20th century). The façade also features the motto and coat of arms of Ferdinand de Bavière, prince bishop of Liège. The top of the tower has a square pinnacle, a convex lantern tower flanked by four pinnacles.

The narthex consists of three lowered arcades supported by Mosan-style columns. The building features a series of high windows with basket-handle arches emphasised by a stone string-course. It has an oak barrelled ceiling made up of 145 panels sculpted and painted by M. and J. Stilmant and G. Goblet, dating from 1623. These panels illustrate theological and apologetic themes. Note the Renaissance influence of the furnishings (main altar in marble), as well as the side altars in wood, the rood screen, pulpit, stained-glass windows (20th century), etc.