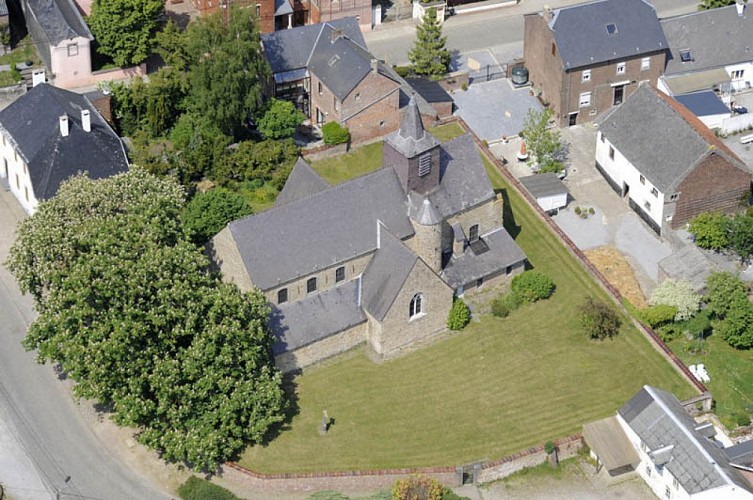 The church of Saint-Lambert

The church of Saint-Lambert de Corroy-le-Château was used previously to confer the abbots of Gembloux, Villers and Floreffe, the abbess of Moustier and the vicar of Villeroux. It is made up of a nave with three bays flanked by two side aisles, a prominent and low transept and a chancel with flat chevet enclosed by two annexes, including a 19th-century sacristy. The church was restored in 1962-1963 by the architect S. Brigode. The façade features a door dating from the 17th century and a basket-handle arch resting on moulded chained jambs.

The nave is characteristic of the transition between Romanesque and Gothic art. It was built at the beginning of the 13th century and has four arcades supported by sturdy piers. The nave is roofed with barrel vaults made from bricks with flat ribs and built in 1752. The low and prominent transept was added to the nave and chancel in the 16th century. To the north and south it has a three-pointed window with trefoil tracery (1963). The transept has a barrel vaulted roof that is similar and contemporary with that in the nave. The crossing has large Gothic arcades. A stair turret has been placed between the transept and the chancel. It consists of a bevelled base with a chained arched door.

The chancel has two bays and a flat chevet. It is topped by ridged vaulting and Gothic triumphal arch and is lit by keyed convex windows on tailed stone uprights. The front of the chancel has a square slate pinnacle, accessible by a stair turret to the south and probably dating from the 17th century.