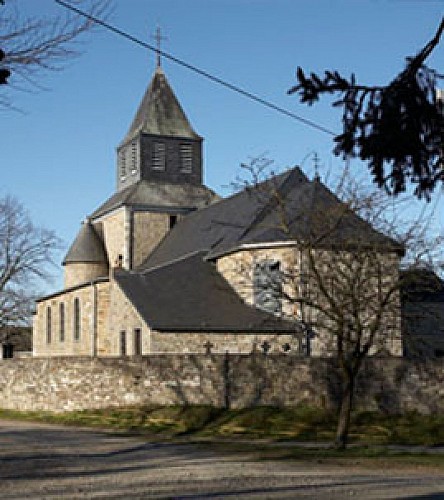 The parish church of Sainte-Catherine de Forêt-Village was built on the site of a primitive chapel dating from the 8th century (around 720). Built from sandstone and limestone blocks, the church has a slate bâtière roof. At the front is an imposing tower rebuilt in 1954. The church has a single nave of three bays to which the other parts of the current building have been added. The south side aisle was added in the 16th and 17th centuries, the chancel in the second half of the 17th century and the chapels and sacristies in the 17th, 18th and 19th centuries.

The massive tower is topped by a square slated bell tower, with openings and rounded off with a pavilion roof. It has a door lowered since 1678 and is flanked to the south by a stair turret (XXe siècle).

The nave has arched windows and the south side aisle is lit by arched windows with toothing stone surrounds. The nave consists of raised arches covered by wall paintings of foliage (16th century) supported by limestone columns. Two of them are decorated by human faces at the base (16th century?). The chancel added in 1684 ends with a chevet in three sections.

Note the wall paintings illustrating the martyrdom of St Barbe situated in the chapel in the south side aisle, as well as the choir stalls, the confessional (19th century) and the pulpit (19th century).