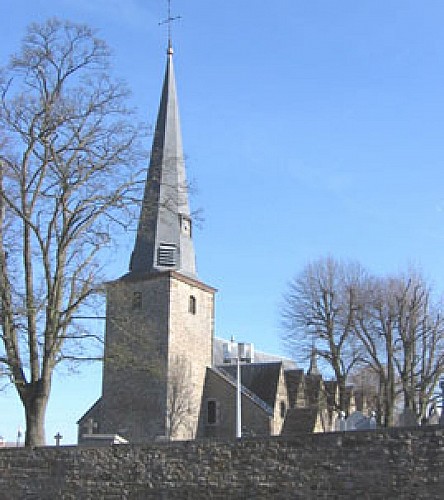 The church of St Sébastien

The church of St Sébastien of Charneux was built on the site of a chapel mentioned from 1380. The building, made from sandstone and limestone blocks, consists of a tower, central nave and a chancel with chevet in three sections. The chevet was blessed in 1443 and the church consecrated in 1616. The massive tower has few openings and is topped by a tall spire with eight slate-covered sides. The entrance is an arched door dating probably from the 17th century.

The nave is flanked by two gabled aisles with linked Gothic arch windows. There are two chronograms: "MaLe/DI-Cent-bene fiat", as well as a date: 1652. This inscription means "They speak of evil regardless of when things are well done", referring to a story according to which the enlargement of the church was only possible if land was sold. This caused criticism and complaints among the people of the village. The aisles, as well as the columns in the nave, were added between 1636 and 1675 by the priest Jacques Warrimont. The nave is covered by a barrel vault ceiling featuring depictions of the Virgin Mary, the Holy Spirit and the four evangelists.

A sacristy was added in the extension of the chancel between 1727 and 1757 by the priest Nicolas Emolet. It is lit by mullioned windows with bands formed by ledges and lintels. The roof features a pinnacle with a polygonal dome. Also of note are the wood panelling of the chancel, the organ and confessionals, as well as two wooden statues depicting the church's patron saint, St Sébastien.