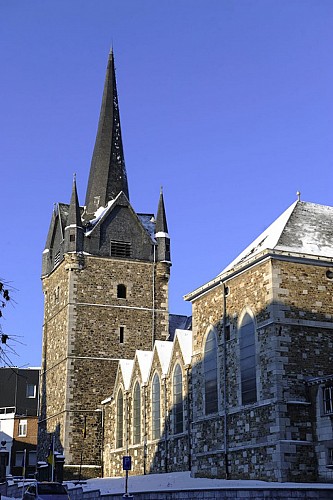 The church of St John the Baptist

The parish church of St John the Baptist features an imposing tower built in the 13th century, the remains of an old castle keep. Built in sandstone and limestone blocks, the church is made up of four levels, each one marked by a moulded line. The tower retains its defensive features: its impressive height of 21 metres, the small number of arrow slit openings (lower levels) and the lighting (upper level). The summit of the tower, topped by a tall spiral-shaped spire, is flanked by watchtowers with octagonal spires.

The church was rebuilt in the 17th century. It consists of a nave, two side aisles and a transept ending with a chancel with an apse with three walls. The crossing of the transept is topped by a polygonal pinnacle. The nave extends along seven Gothic arched bays made up of a dado, band of limestone and little triangular pediments. Each of these pediments features either the date it was built or the symbols 'IHS', 'AO' or 'MRA'. Two references to the building of the church are also visible in the transept and the chancel, where the date 1653 formed in large limestone blocks can be seen. The building features neo-Gothic sacristies built in the 19th century (1870) by the Liège architect E Halkin.

The façade is pierced by an arched doorway topped by a triangular pediment and a crucifix flanked by two Gothic arched bay windows. In 1923, three tombstones were added dating from 1630, 1654 and the 18th century.