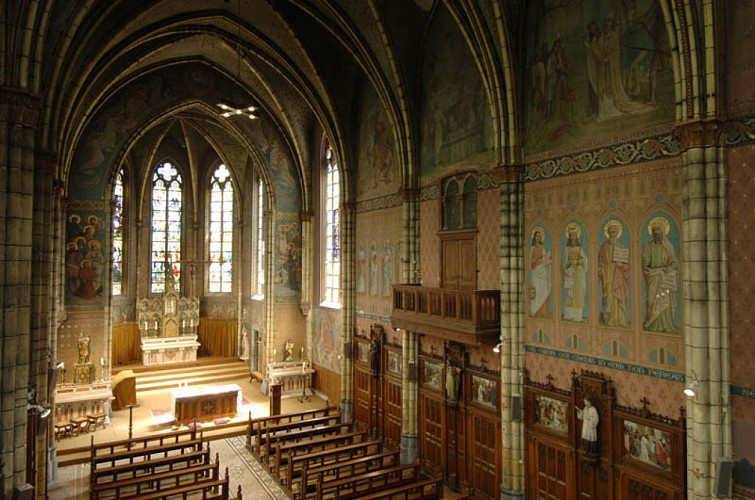 The decanal (i.e. placed under the authority of a dean) church of St Martin and St Hadelin, a former collegiate church, is a neo-Gothic building constructed on a structure dating from the 8th century. The chapter of Celles was transferred there, taking with it the remains of St Hadelin. This monk, a disciple of St Remaclus, lived in Celles in the 7th century.

The church has been rebuilt several times over the centuries. The tower was added in the 14th century, the chancel in the 16th century (1524) and the upper sections of the nave in the 18th century (1749). The church was partially destroyed by fire in 1914. The tower, nave and transept were then rebuilt by E Jamar and L Habran in 1921 in the neo-Gothic style. The Gothic chancel from 1524, which escaped the fire, was also restored.

Built entirely in limestone, the chancel is made up of two bays and a chevet with three walls. The Gothic arch bay windows are slender with Gothic tracery. The roof of the building is made up of bâtière with three ridges. The neo-Gothic vaults are visible on the outside and date from the rebuilding of the church in the 20th century. The building features furnishings dating from the 16th to 18th centuries, as well as the 20th century, including the hunt of St Hadelin, ornamented in silver and a testimony to Roman art.