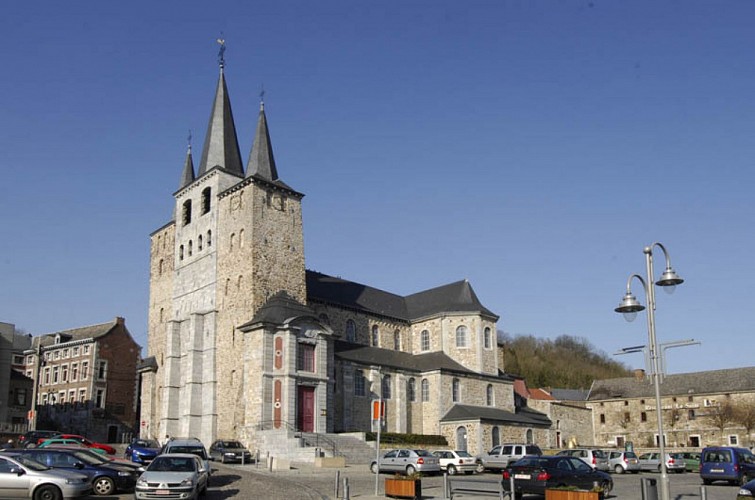 The collegiate church of Saint-Georges-et-Sainte-Ode

The collegiate church of Saint-Georges-et-Sainte-Ode occupies a site that is steeped in history, beginning in the time of the Celts. This was followed by a Roman villa, then a Christian sanctuary dedicated in the 6th century to St George by St Oda.

The earliest records of this place of worship go back to the 7th century, a fact that has been confirmed by archaeological excavations, which uncovered a sarcophagus probably dating from the 8th century and containing the remains of sancta Chrodoara, considered to be St Oda. Other discoveries include Carolingian and pre-Romanesque modifications to the Merovingian building.

The Romanesque church, which is partly preserved, followed these early incarnations and dates from the 11th century being quickly completed in the 12th century. The Romanesque building had a chancel with pillars framed by two towers, offsetting the entrance to the sides of the church, which itself was modified on two occasions in the 16th and 17th centuries to give the front of the building greater bulk.

The naves with arched bay windows retain some of the Roman feel. This contrasts with the interior, which was taken back in full during most of the 18th century. This resulted in the pillars and wooden ceiling being replaced by vaulting supported by columns, raising the whole interior. Like the transept, the aisles were also rebuilt and side entrances created in the towers to replace the previous ones, which were located in the aisles. These alterations affected the chancel, which gained a chapter house.

The interior of the church has plasterwork throughout and bears the clear mark of the 18th century, displaying decoration consisting of floral and symbolic motifs. The only exception is a 17th-century choir screen that encloses the chancel. A cloister encloses the east chancel in an unusual layout.