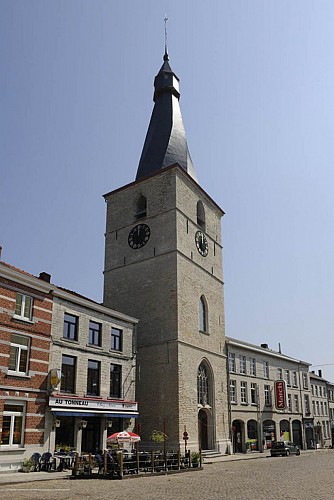 Identifiable by its tower topped by an unusual twisted spire dating from the first half of the 17th century, Notre-Dame chapel, also known as the 'chapel of the Market', is situated in the Grand-Place, which was formerly the market square. Built within the walls in the 14th century thanks to the generosity of the town's Merchants and Tradesmen, the church is in local Gobertange stone. It consists of a four-level tower, a single nave with two rows of pews and a chancel with a polygonal apse. An entrance door in the Gothic style forms part of an ogival structure topped by a high window. Past this door and the west tower, the junction between it and the nave is marked by a pointed arch like the four windows that illuminate the nave, or the lanceted ones that adorn the chancel. The floor is chequerboard paved, with alternating Gobertange stone and Meuse limestone. Redeveloped, modified and enlarged on a number of occasions through to the 18th century - in particular after a fire in the 17th century - the chapel was restored in full during a process completed in 2011.

The furnishings include a Baroque main altar, dedicated to Our Lady of the Rosary, made in 1716 by Guillaume Castagne of Namur. The left-hand altar is dedicated to the Virgin, while the one on the right, dedicated to St Rita, was originally dedicated to St Roch, who received prayers as protector in times of epidemics. Finally, the chapel retains a remarkable monument, a cenotaph in bluestone, topped by the recumbent statues of Count Winand de Glymes and his wife, Michelle de Yedeghem, who died in the second half of the 17th century and, with the de l'Escaille family, represent important local lineages. Originally occupying the chancel, then the nave, the latter was relocated during the restoration in the annex replacing the sacristy.