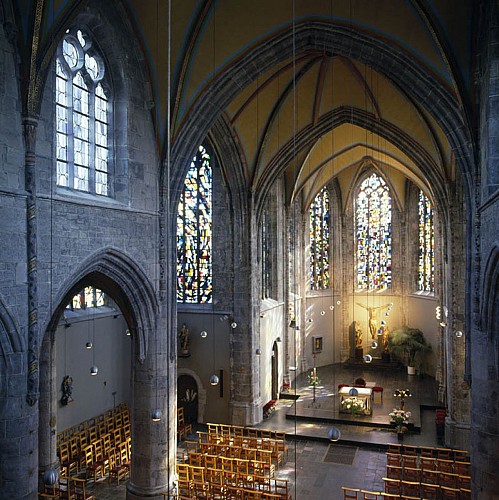 The church of Saint-Remacle is a Gothic limestone building. Built in around 1500 on the site of a building probably dating from the 9th century, the church suffered fires in 1615 and 1806 and went through two major restoration programmes in the 19th and 20th centuries.

The church consists of three naves with three bays, a non-prominent transept, a chancel in three sections and with two bays. At the front of the church is a tower with a number of slits and a classic doorway from 1715. The tower is topped by a Baroque bell tower in slate rebuilt as part of the first restoration programme. It features a bell with onion dome above, a skylight and octagonal aedicule.

The nave features arches whose springing and cornices are adorned by sculpted heads. The windows with flamboyant tracery in the nave and transept were restored in the 19th century and decorated with a dripstone cordon.

There are two entrances to the church, one through the south side aisle and the other through the south croisillion. The first of these is moulded with a Roman arch with prismatic bases and archivolts on bases featuring human heads.

Note the stained glass windows created in 1974 by Louis-Marie Londot.