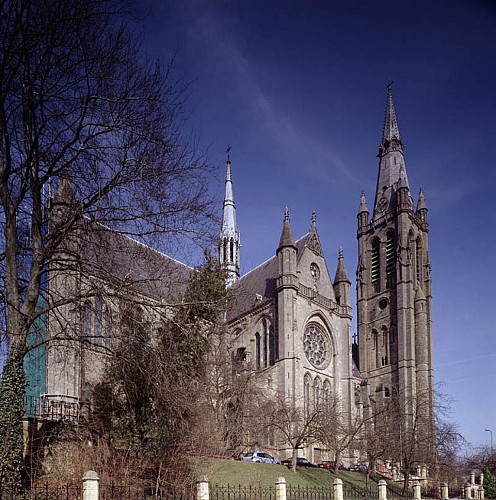 The church of Saint-Martin

The church of St Martin of Arlon is a neo-Gothic building constructed in the 19th century in the Gothic style (doorway with tympanum decorated with reliefs, wide triforium nave, flying buttresses). Based on plans by Gheluwe, remodelled by M. de Noyette, the church was built in 1907-1914 in Larochette sandstone (exterior), Savonnière sandstone and blue Sprimont limestone (columns and vault arches). this outstanding construction highlights the town of Arlon, recently promoted to the status of county town for the province of Luxembourg.

In the shape of a Latin cross, the church impresses with its dimensions. It is made up of a nave 68 metres long, two side aisles, a transept of 35 metres and a chancel with flat chevet. The crossing is under an octagonal leaded skylight, the work of J. Bister. The transept and chevet are adjoined by octagonal corner turrets. The central nave, consisting of five bays, has a ribbed vault roof. The massive east tower, rising to 97 metres is topped by a polygonal spire and four turrets. Note the coverings in bluestone.

The various doorways into the church feature tympanums: the south door depicts St Hubert, the north door represents saints Bernard, Sébastien and Catherine, while the east door depicts the glorification of the patron saint of the church, St Martin.

Note the stained glass windows, the neo-Romanesque pulpit in grey marble, the organ, as well as as the rose window in the chevet which is 8 metres in diameter and was made by the master window-maker from Ghent, Ladon.