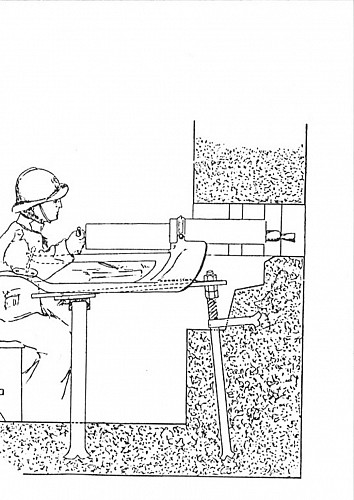 The Fortin in Vielsalm cemetery

"All the shelters are designed for a machine gun with 4 gunners, including a commissioned officer. They will be built so as to give maximum protection against a single shot from a 77 mm gun. Having neither ventilation nor an observation turret, nor a searchlight, they are to be small in size, thereby reducing their vulnerability and visibility. The best plan would be to hide them under trees or in buildings. If this is impossible, they will be camouflaged. The goal is to continue to make them invisible so that the enemy cannot subject them to observed fire."  Extract from the military archives in Evere.

The entrance, located on the side least exposed to enemy fire, varied according to the lie of the land and was closed by a door made of galvanized steel. It had a small window of 10 cm side enabling an occupant to view the area around the entrance and its defence. The doorway, opening to allow the gun to be fired, could be closed by an outer metal flap which swivelled sideways. It could be locked from the inside.  It could be padlocked from the outside.

The Chardome gun mount, named after the officer in the Chasseurs Ardennais who developed it (see drawing) was sealed inside. It consisted of a circular bearing fixed to two posts set into the floor on which rested a base plate that rotated around a threaded shaft sealed in the middle of the aperture. On the base plate, the soldiers attached the Maxim 08/15 machine gun mounted on its field carriage, known as a sled carriage because of its shape. This machine gun, which was used in the Belgian army, came from a stock of weapons recovered in 1918 following the German defeat.