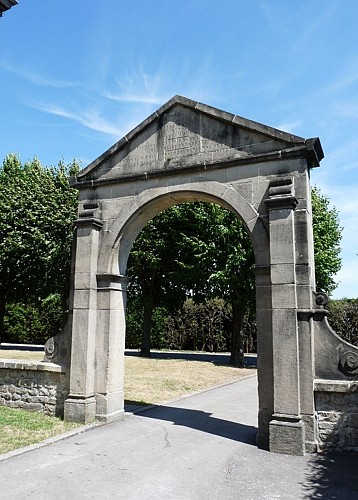 Gateway to the ancient abbey of Clairefontaine

The Cistercian Abbey of Clairefontaine was destroyed during the French Revolution. This former abbey gateway was brought to this location in 1911. It is said to date from 1700. After the abbey was destroyed, the gateway was first placed, in 1818, at the Church of Habergy: this was the result of the inhabitants of that village having gone to collect stones from the site of the old abbey. Mayor N. Ensch-Tesch of Arlon had the gate installed on the Mount and was also responsible for the renovation of the Luxembourg coat-of-arms on the pediment above the centre of the arch.