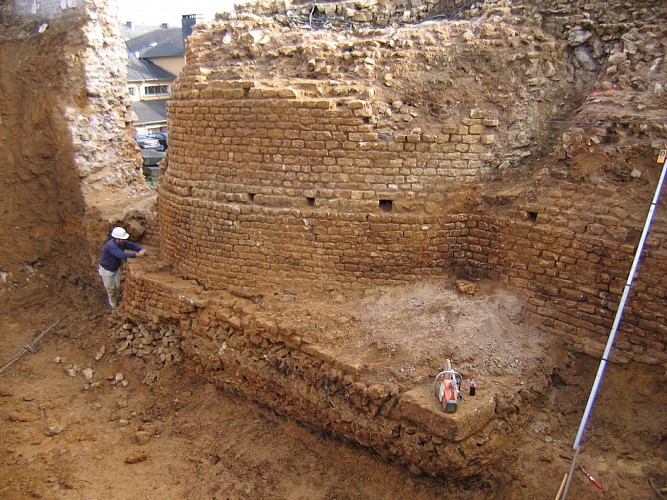 Arlon can rightly claim to be amongst the oldest cities of Belgium. Its situation derives from a location at the intersection of two major Roman roads: the road from Metz to Tongeren and the road from Reims to Trier. This ‘crossroad position’ was the reason for the economic development of Arlon and for why the locality grew prosperous during the first 3 centuries of our era. Much archaeological evidence provides us with an insight into this rich period of development. The settlement stretched over a large zone on both sides of the river Semois as well as on the southern slope of the hill.  At the end of the later Roman Empire (end of 3rd to beginning of 4th century), Gaul was invaded by Germanic tribes. The Romans reacted to this with a vast building campaign of fortifications around the main settlements. In Arlon, the Roman army decided to limit the fortification to the hilltop, rather than the vicus situated in the Semois valley. This castrum served as a refuge from the attacks. The fortifying walls were built with materials found in destroyed cemeteries and civil monuments that were dismantled. These huge sandstone blocks were used in the foundations of the wall. This is the reason why so many sculpted fragments of funerary and civil monuments have survived until now. Most of these Gallo-Roman stones were found during building works in cellars or during the construction of new buildings in the immediate surroundings of the old Roman wall.