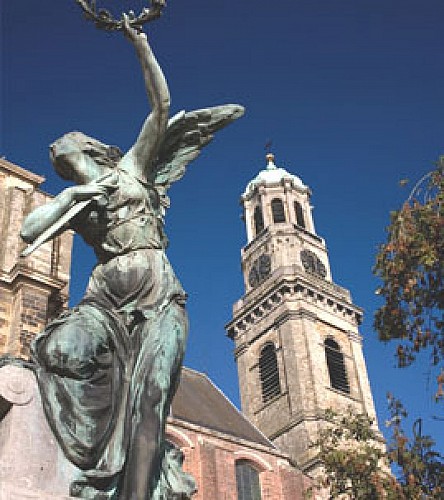 This Baroque church with three naves, of brick and Lede sandstone, was consecrated in 1727 as the abbey church of the Premonstratensians, after an architectural history of 100 years. Since 1813 it has served as a parish church, but before the Abbot Ferdinand Vander Haeghen had envisaged a dual use of the church: the choir and the transept would serve as the abbey church, while the nave would receive the pilgrims.The square tower and its hexagonal lantern were added only in 1825-1844 by the architect Lodewijk Roelandt (1786-1864).

This church is one of the most important houses of prayer in the country. Culturally, it is the most complete creation in the entire region of Dendre thanks to its richly decorated interior and its surprising homogeneity.

The stalls of the choir and the cathedra date from the 17th century and come from the old parish church, destroyed in 1816-1828. The remainder of the decoration, in the Baroque style and the Regency style, came into being under the direction of Abbot Vander Haeghen during the first half of the 18th century.

Thus the church owes its renown to the remarkable set of panelling, ordered in 1736 from the Mechelen sculptor Theodore Verhaegen who executed one of the two sumptuous confessionals, as well as the wainscoting of the lateral naves that include ten scenes from the life of Saint Cornelius and Saint Cyprian, to whom the ancient abbey was consecrated.

The lower part of the central dome, adorned with splendid stuccos, should also be admired.