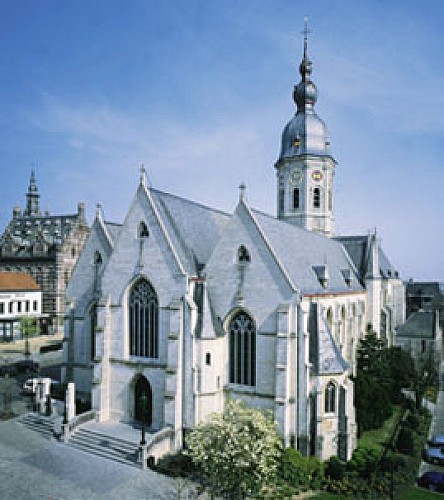 Temse is known for being the first municipality of the Pays de Waas, Christianised by Saint Amalberga. The Gothic church of Notre-Dame was built in 1645 on the foundations of the chapel of Saint Amalberga (770). Since the 13th century, a pilgrimage dedicated to Saint Amalberga has been leading pilgrims to Temse.

Inside the church, a tomb was erected for this saint in 1841. In the right transept another tomb dating from the 16th century is formed from two recumbent figures, one of them the knight Lefever, benefactor of Temse.

A communion rail, Baroque wooden panelling and several pieces in wrought metal from the 18th century, works of the local sculptors Adriaan and Philip Nys, give the Church of Our Lady an appearance of tranquil strength and of reverence.

The dome-shaped bell tower of the church is visible from the other bank of the Scheldt River. The church and the tower of the town hall make Temse one of the most beautiful small cities in the region. At night the church is fully illuminated. This gives a note of enchantment to the whole.

To complete this description, let us cite two more monuments that are significant to the inhabitants of Temse: the one, religious, was erected in front of the church in memory of the priest Edward Poppe following his beatification; the other, mischievous, located in front of the library, represents Jommeke, a comic book character known throughout Flanders.