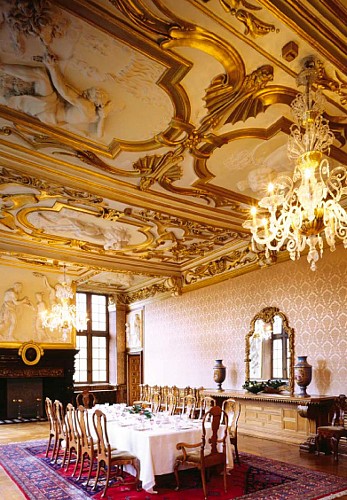 The castle of the earls of Marchin

The current castle is the descendant of a mediaeval fortress built on a rocky promontory overlooking the Hoyoux valley from a height of 58 metres. It is in the centre of a 450-hectare estate and is built in a natural reserve, with 38 hectares of castle grounds. Built  from 1655 onwards, in brick and limestone by Jean-Gaspard-Ferdinand, count of Marchin, the Château de Modave consists of a main building with two wings projecting on either side.

The stuccoes in the Salle des Gardes and the entrance hall give the genealogy of the builders of the château, while those in the Hercules Room and the Gobelins Room - named after its three Brussels tapestries - take the labours of Hercules as their theme.

In 1706, the château was bought by Baron Arnold de Ville, who perfected the “Marly Machine” which pumped water uphill from the river Seine to Versailles and was based on the machine invented by Renkin Sualem to supply the fountains at Modave.

More information on your PC from www.modave-castle.be/Francais/Info.html