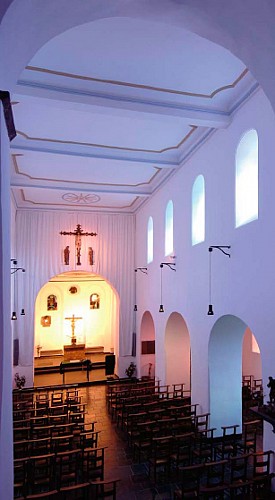 The church of Saint-Étienne

The church of St Étienne at Waha still has its dedication stone bearing the date 1050.

Romanesque in style, it has a low chancel and flat east wall, a nave with three bays and two side aisles, and a massive tower of more recent date.

Its whitewashed interior is triplearcaded, the arcades being supported on heavy pillars.

The ceiling of the nave is decorated with moulded plasterwork from the 17th-18th centuries.

The chancel has a double arcade, an oculus (round window) and two glazed windows. Some predominantly blue stained-glass windows, by a famous Belgian artist, the late Jean-Michel Folon, death in 2005, were recently installed in the church.