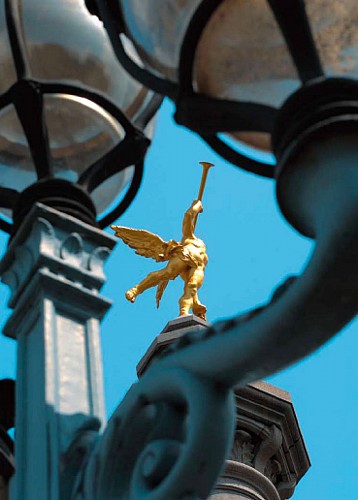 Built amid the excitement of the 1905 World Fair, the Fragnée bridge comprises three metal spans supported by two piers and two abutment piers in bluestone.

The street lamps are of bronze, but the railings have cast-iron pilasters and a wrought iron framework decorated with brass. Each approach to the bridge is marked by two monumental columns, with a Renommée (figure representing Fame) in gilded bronze at the top.

Two figures of Poseidon and two allegories of the Meuse, also in bronze, adorn the base of the columns. Major restoration work between 1993 and 2001 restored the bridge to its former glory.