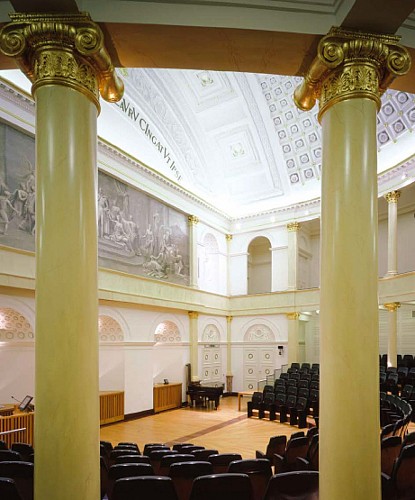 The "salle académique" of the University of Liège

The University of Liège, founded in 1817 by William I, king of the Netherlands, has a neoclassical lecture theatre.

The original portico, completely hidden by the building erected in the 1890s, houses a bronze and marble memorial dedicated to members of the university who died in the First World War. The lecture theatre is semicircular, with Ionic and Corinthian columns supporting a huge double gallery, and a panelled stucco ceiling topped by a half-cupola.

The grisaille painting above the platform depicts William I offering a crown of laurels, held out by Justice, to a young graduate guided by Minerva.