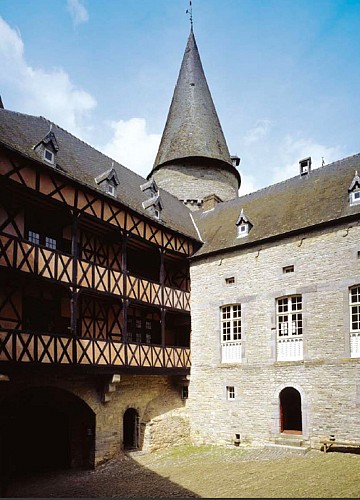 The fortress of Vêves dates largely from the 13th century.

Built as a pentagon with five circular towers, its enclosing wall follows the stratum of rock lying directly beneath.

The tallest tower (38 metres), which is called the watchtower, or (incorrectly) the dungeon, flanks the only access to the courtyard, which still shows traces of the hinges of the entrance gate and the groove (now filled) of the portcullis.

In the internal courtyard, a rare woodenframed open gallery, the framing being in the form of a St Andrew’s cross, connects the original mediaeval house and the 16th-century wing.

The south-east wing was remodelled in the 18th century in the style of the period.