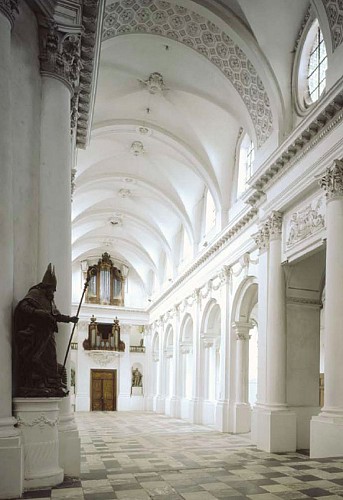 The former abbey of Floreffe

The former abbey at Floreffe stands on a rocky spur overlooking the Sambre valley.

In 1121, encouraged by St Norbert, a small community of monks built what became the third-largest monastic house of the Premonstratensian order.

The abbey church was built from the 12th century onwards, combining the Romanesque and Gothic styles, but was remodelled in the neoclassical style in the 18th century. It has large carved wooden choir stalls and a fine baroque library.

Some interesting vestiges of the mediaeval buildings remain, including the room for the lay brothers, which is decorated with old paintings, as well as the vaulted refectory and the mill.

The quality contemporary contribution made by the architect, Roger Bastin, to the new school buildings extends the centuries-old architectural history of Floreffe.