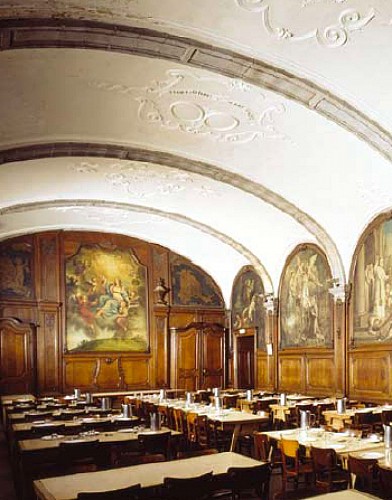 The former abbey of Bonne-Espérance

The Premonstratensian monks arrived in 1128, and in the 13th century they erected the Gothic abbey buildings, of which the cloister, kitchen and chapter house remain.

The abbey was damaged by fire in 1568 and rebuilt in the early 17th century. Undamaged during the French Revolution, the buildings still comprise a seventeenth century entrance gate, an area for receiving visitors, wings of the main courtyard, the chauffoir (the only heated room in the abbey), refectory and the church, in which the 14th-century statue of Notre Dame de Bonne Espérance is venerated.

In 1829, the Tournai seminary turned the abbey into an educational establishment.

Listed as an exceptional heritage site of Wallonia (2009)