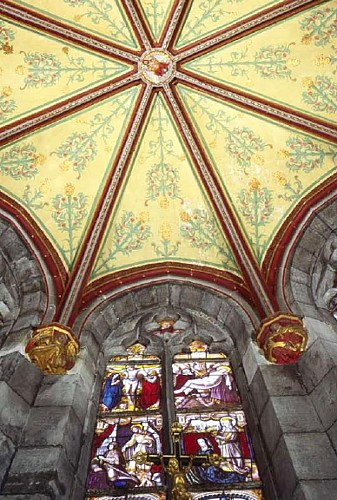 The chapel of the Chateau de la Follie

The Château de la Follie takes its name from its wooded setting, follie being a synonym of feuillée, meaning “leafy”.

A 16th-century house built in the style of a mediaeval fortress, the château was restored in the early 19th century.

The octagonal Gothic chapel, dedicated to St Christopher, has a vaulted ceiling with painted ribs.

Four windows contain 16th-century stained glass, the only complete set of windows of this kind in a chateau chapel in Wallonia. Each is divided horizontally into three sections: the first depicts a scene from the Passion, the second shows members of the family who commissioned the window, and the third shows their respective coats of arms.

Chapel listed as an exceptional heritage site of Wallonia