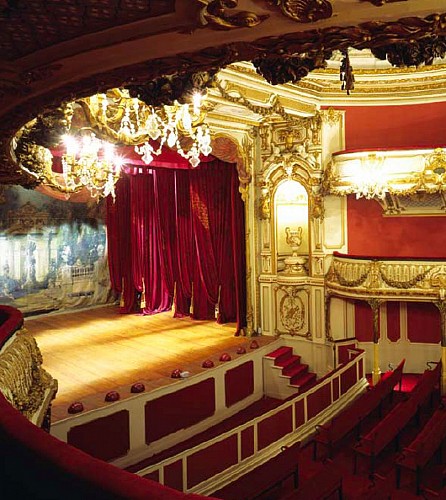 The theatre of the castle

The present château was built in 1935 on the site of a palace complex which has recently been excavated. It incorporates a theatre founded by Madame Tallien, who became the Princess of Chimay in 1805.

Dating from 1863, it has an oval proscenium arch auditorium, with stalls, two balconies and the prince’s box. Its remarkable ceiling has a flattened cupola, painted with scenes of Paradise and with an openwork wood ceiling rose at its centre.

The décor is inspired by sketches produced during the reign of Louis XV for the theatre at Fontainebleau.

Since 1991, the theatre has been the venue for a well-known international baroque singing competition.