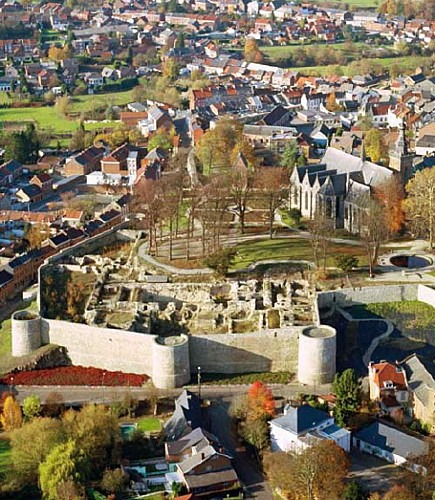 The ramparts and the old palace

Binche is of Roman origin and lies in a rich agricultural area at the heart of a major road network.

In the 11th-12th century, the counts of Hainaut built an imposing rectangular keep on a rocky spur surrounded by the river Samme which protected the Renaissance palace of Mary of Habsburg, governor of the Netherlands.

The town’s first wall was built in the 12th century by Baudouin IV, count of Hainaut. It was ahead of its time in being built using stone, although wood was also used.

The present thick stone wall was built during the 14th century, and only 300 m of its overall length (2 km), and 5 of its 30 towers and its gates have disappeared.

With the support of the European Union, the Walloon Region has been able to embark on an extensive programme to restore the ramparts of Binche. At the same time, it has also conducted major archaeological excavations that have revealed the full extent of the significance of the Binche site, along with its extremely well preserved mediaeval defences.

Ramparts listed as an exceptional heritage site of Wallonia