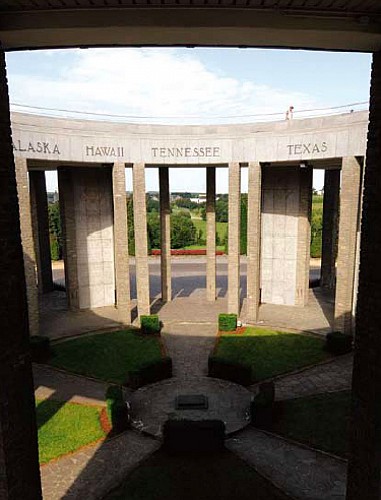 In December 1944, the von Rundstedt offensive, often called “the Battle of the Bulge”, was halted by American troops at Mardasson, near Bastogne.

The human cost of this was terrible, with 76,890 combatants killed, wounded or missing in action, on top of many civilian casualties.

A commemorative stone, dated 4 July 1946, was laid to mark the beginning of the memorial’s construction.

Its architect, Dedoyard, gave it the form of a five-pointed star, each point being 31 metres long and 12 metres high. A circular upper gallery allows visitors to walk around the centre of the star, and a crypt, decorated with religious mosaics created by Fernand Léger, offers a space for contemplation.

Close by, the Bastogne Historical Centre will be replaced in 2012 by a World War Two Memorial Centre.