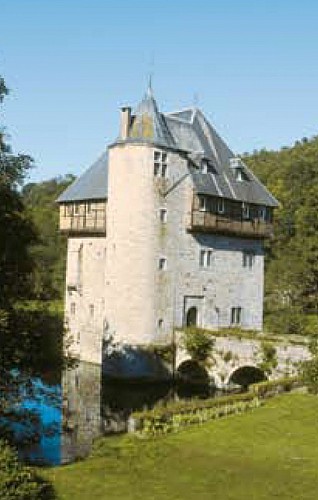 This mighty rectangular building, encircled by an enormous moat, was the centre of a nobleman’s estate which was first associated with Liège and then, in 1344, with Namur.

Originally reached via a moveable footbridge, it is now accessed by a triple-arched bridge.

This leads to the lower courtyard, now a farm, which was also protected by a moat and a fortified gateway.

The tower has three original storeys built of limestone, the third storey being the preferred living area as it received more light.

A latrine, projecting outwards on a corbel, is still present.

The fourth storey, which is of brick and timber and also corbelled, dates from the 16th century.