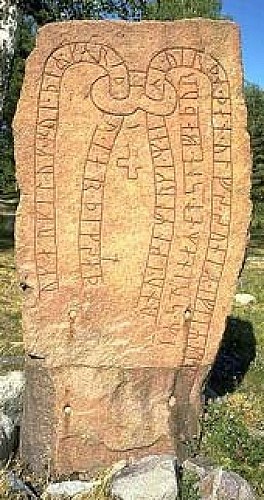 On the slope down towards Vallentuna Sea's eastern shore are two rune stones in the old district the place. The inscription is from the 1000's and partly written in verse. The stones are 10 meters apart, but the text is a coherent whole. The inscription begins on the red stone Runes Transliteration Normalization [Ulfkell] (?) Ok ok Arnkell Gyi þæiR gærðu hiar þingstað ... [M] UNU æigi Maerki mæiRi verde, Than Ulf syniR æftiR Gaer [you], _iR svæinaR, at sensory faður. The inscription continues on the gray stone Runes Transliteration Normalization Ræistu stæina ok staf unnu (?) Ok inn Mikl at iarteknum. Ok Gyriði been extended at veri. Thy one of grati getit lazy. Gunnarr hiogg stæin. Translation (of the inscription as a whole) (Ulvkell) and Arnkel and Gye they did this thing place - not to be a memorial be greater than the Ulv's sons did after his surprise (?) Svenner after his father. They traveled the stones and also the rod from above (?) The great honor to mark (?). Also Gyrid loved her husband. Therefore, in mourning poem, he must sing. Gunnar hewed stone. Translation according to Helmer Gustavson, National Heritage Board. The characters in the inscription belongs to the so-called Skålhamra family, who have to travel several rune stones around Lake Vallentuna. It is through these inscriptions which we can conclude that the inscription's first name was Ulvkell. Most of the inscription is in verse form, namely in the Old Icelandic literature known verse measure fornyrðislag. In the box above, the inscription is reproduced in linear form. The carver uses words crying in the sense of grief poem, lament 'is also something that connects the legend with the Old Icelandic literature, for example. poem Máriugrátr. This meaning of the word is otherwise unknown in older Swedish. By Bällstainskriften we get a hint that such poetry might have occurred even in the Viking age Sweden. Ulv's memory has not only been honored by the erection of two rune stones, but also to put up a pole. To put up one or more pieces to the memory of the dead mentioned in another five between Swedish inscriptions. An important clue to the meaning of this custom, we have been through a travelogue of Ahmad Ibn Fadlan. He was a diplomat sent by the caliph in Baghdad. During a trip 921/922 in the areas around the lower Volga, he met a group of northerners (RUS) and got to the funeral ceremony for one of their chiefs. After having burned the governor and his ship threw it up high. On the mound erected since a pole of birch in which one carved and the dead man's name, first name of the Norsemen king. Several researchers have thought that the rod that has been erected in memory of Wolf would be such a pole as Ibn Fadlan tells us about. Carver Mr Eriksson has named only on this stone. He he has several distinctive features and a large number of inscriptions have been assumed to be carved by him. If all carved by Gunnar or in the case of a pair of carver who worked in "Gunnar's style 'there are divided opinions on. The latter alternavtivet is most likely. Next to the red rune stone U 225 is a square stone circle which probably has nothing to do with the things on the site mentioned in the inscription. Ting The site was an excellent location for a rune and more of our finest rune stones are erected at such, for example. Anund pile outside Västerås and Kjul ridge between Strangnas and Eskilstuna.