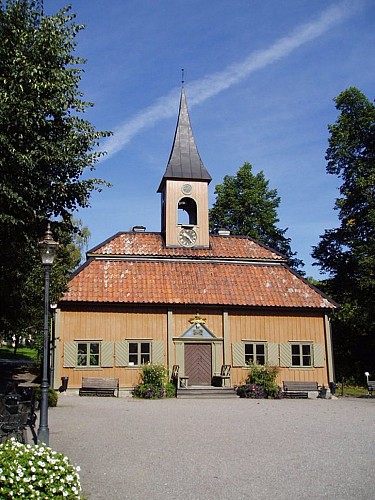 Sigtuna Town Hall
When the mayor Eric Kihlman began his service in Sigtuna 1737,
he found the town hall,built in the 17th century, in a deplorable state.
At the initiative of Kihlman, the construction of the present town
hall was begun, on the same site as the old one. The tower was
moved from the old building to the new one. In 1744 the hall was
inaugurated and a general council could be held there.
The town hall has two rooms. The left one was until the thirties the
guardroom of the police and had two cells. The use of these cells
was prohibited for hygienic reasons at the end of the thirties and it
was then changed into a service- and meeting room.
The room to the right is the council hall. Most of the furniture and
other objects were brought there by mayor Kihlman in connection
with the furnishing of the room around the years 1740 and 1750.
The table was brought to the town hall by Kihlman. His mother-inlaw
had painted it to look like curly-grained birch-wood.
The armchairs behind the table are made in baroque style. The big
one, for the presiding officer, was bought from the house of a
deceased count. The two smaller ones were brought from the home
of the mayor.
The four chairs in late baroque style place along the north wall
were, according to Kihlman in his account over his period of office,
bought from a forestry officer, who was a neighbour to the town
hall.
The chairs by the wall towards the square are locally manufactured
slat-backed chairs. When they were acquired is uncertain.
A crystal chandelier from the 17th century is hanging from the
ceiling.
Of the eight royal portraits that hang in the town hall, five have
been brought there by Kihlman.
From left to right:
No. 1 Karl X Gustav
No. 2 Karl XI, bought by Kihlman in a booth in Stockholm.
The price paid was only 27 daler copper. In comparison the price
paid for the red tablecloth was 60 daler copper!
No. 3 Karl XII, probably painted by David von Kraft.
No. 5 Fredrik I, given the place of honour since he was the
ruling king when the town hall was inaugurated. This portrait was
given by the brother-in-law of the mayor, Johan Henric Scheffel
who also is believed to have painted it.
No. 7 Queen Hedvig Eleonora came from the home of
Kihlman’s parents.
The three remaining smaller portraits of
No. 4 Gustav II Adolf
No. 6 Gustav Vasa and
No. 8 a second portrait of Karl X Gustav are of unknown
origin.