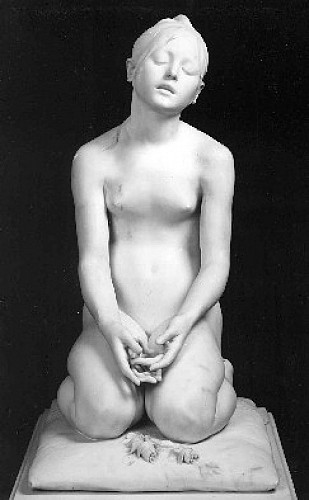 Julien Dillens was Thomas Vinçotte’s fellow student in Eugène Simonis’s workshop. He took part in his first fair when he was 21. He received the Prix de Rome in 1877, and spent four years travelling across Italy, absorbing Renaissance sculpture. His career truly took off immediately on his return, in 1881.

He exhibited this 'Funerary Figure’ four years later. Abandoned to the desperation ruining her life, a rose mowed down in her spring as the ones which lay at her knees, the young girl personifies both the absent girl ravished from life and the abandoned girl with only tears left (in 'Les Musées royaux des Beaux-Arts de Belgique : Le guide des collections d'art ancien & d'art moderne', Brussels, RMFAB, 1996, p. 139)