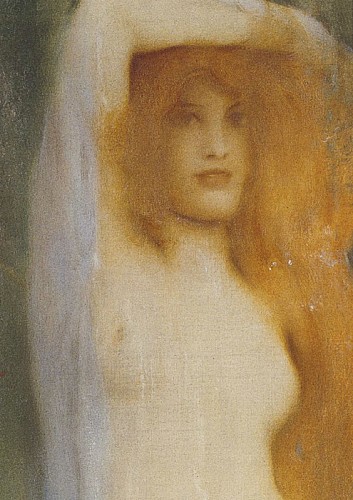 Painted in 1892, Acrasia and Britomart were inspired by two female characters from 'The Faerie Queen' by Edmund Spenser. Here, Fernand Khnopff revived the magical inspiration of English legends loved by the Pre-Raphaelites, who were an important source of inspiration for him.

Acrasia embodies carnal distractions while Britomart personifies marital fidelity. Khnopff expresses symbolism through clothing: the veil which through a play of transparency reveals the offered nudity for one, the surface glitter of the impenetrable armor for the other.

If Acrasia’s silhouette attracts the eye in the diffuse fairness of a milky body, Britomart hides behind an armor reflecting the eye like a mirror. The voluptuous woman responds to the androgynous knight.