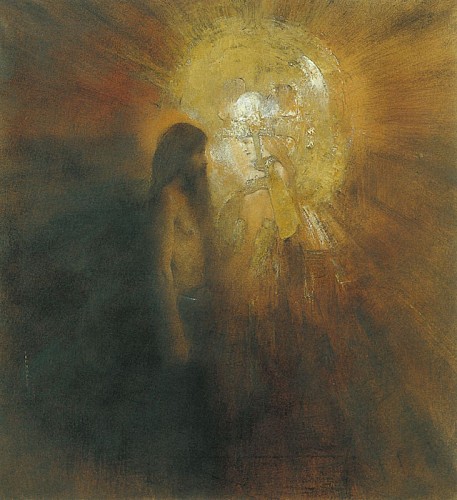 Khnopff chose to underline movement’s hieratic quality which established the apparition as an icon. Gems, frills, brocades, gold and exotic ornaments are replaced by the immaculate glow of a ray radiating into the night from the queen’s face.

The work on lights which plays with the textural contrast of oil, gouache and charcoal transfigures the body into a sensual realm. The frontality of the work summarizes the interior struggle tearing the hermit apart, and the expected kiss is symbolically inscribed in the tenuous distance, opposing the faces.

The space between the two mouths fills the center of the composition. The image is built from this magnetic focus through a violent contrast between shadow and the apparition entirely made of virginal light. The woman, highlighted by white touches executed in oil, stands out with the intensity of an iridescent jewel (from Michel Draguet, in '20 chefs-d'oeuvre de la collection Gillion Crowet', Brussels, 2006, p. 39)