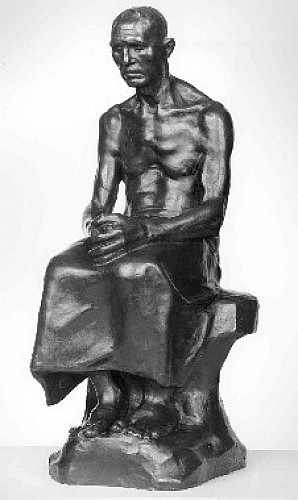 The Ancestor radiates a deep intensity of expression through its sheer simplicity. "Hands on his knees, in the attitude of a body leaning towards eternal rest", The Ancestor perpetuates, according to Camille Lemonnier, the "meditative survival of the past".

Meunier chose this subject matter several times. In fact, in 1902, he went back to it with a bas-relief depicting the same character, in a profile view, sitting under a fruit tree and lost in thought, while on the horizon the sun slowly sets over the sea.

There is also an aquarelle with the exact same scene, but without the sunset. Interviewed at the time by a German journalist, the artist admitted that these last variants represented the symbolist trend of his work (from Pierre Baudson, in 'Agenda des Musées royaux des Beaux-Arts de Belgique', Brussels, RMFAB, 1992, jan-mar)