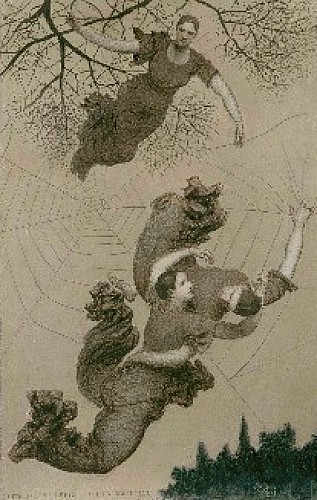 Mellery was a precursor of symbolism in Belgium. From 1885, he produced intimist works lending objects a silent life, full of mystery and poetry.

In parallel, he produced many mural paintings in the codified language characteristic of allegoric art. His classical allegories stand against a golden background, inspired by Byzantine tradition. This non realization of space, which eliminates any possibility of localization, lends the scenes a timeless dimension.

Mellery painted this work in the 1890s and he himself gave it the title we can see in the bottom left corner. Mellery is one of the very few Belgian symbolist painters to have made abundant use of writing in his allegoric works.

This is the only known example in which Mellery used a background combining silver and gold, probably to better convey the autumnal atmosphere (from Anne Goffart, in 'Musée d'Art Moderne. Œuvres choisies', Brussels, RMFAB, 2001, p. 96-97)