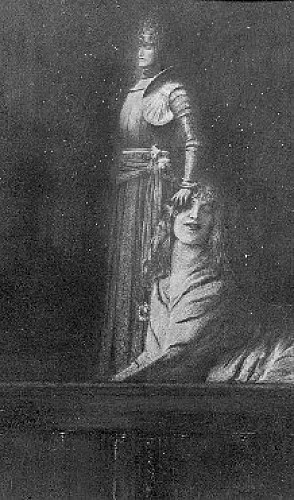 The invention of photography gave symbolist artists a work and interpretation tool, but above all it offered art a new feeling of collusion of vision, emotion and creation. By showing an interest in photography, practicing it and following the evolution of new techniques, Khnopff joined the generation of artists whose creative aim's integrity did not feel threatened in the least.

As Gustave Moreau, Alphonse Mucha, Edvard Munch, and Franz von Stuck, he used photography as a composition sketch and a collection of images from real-life memories. However, he is one of the few artists who retook possession of the shots of his own works to recreate new originals.

In his artistic mind, Khnopff considered each and every print as a new original work, in a reduced format, as if miniaturized. Dwindling on the originality of each photograph, the artist worked them over one by one, clarifying a few strokes or shading a shadowy part in Conté crayon.

Favoring colored crayons’ leads softness, which only partially stuck on the photograph’s mat surface, he would highlight the angle of a mouth, the motion of hair, or the draping of cloth, with a touch of color. He did not always use the same colors as in the originals and thus, through a new interpretation, he created a new mysterious vision of an already familiar subject (from Anne Adriaens-Pannier, in catalogue 'Fernand Khnopff (1858-1921)', Brussels, RMFAB, 2004, p. 249-261)