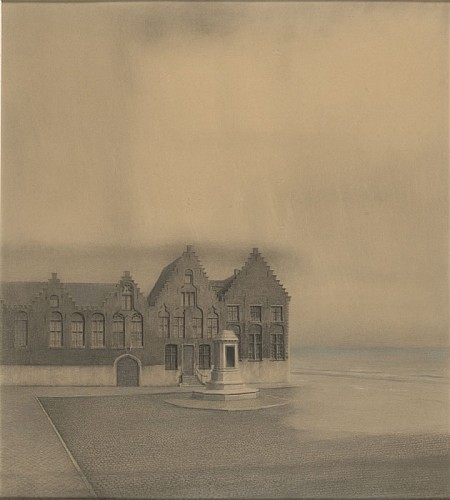 ‘The Abandoned Town’ offers us a truly unusual vision of a corner of Hans Memling Square, in Bruges, the Convent of the Black Sisters represented in extreme details, here with walled-up doors and windows. The strange combination of a near-photographic city view and of a mythic sea creates a very special dreamlike world.

In the center of the desolate square, we can see an enigmatic pedestal, made of white stone, with a dark and mysterious recess. Hans Memling’s statue, produced in 1871 by Hendrik Pickery, has completely disappeared.

Not a soul is to be seen and the silence is ominous. The desolation is furthermore reinforced by lackluster grey skies, which evoke alienation, even death. On the right, the sea is receding towards infinity, leaving a trace of blue on the horizon.

That’s how Bruges sunk, a city abandoned by the sea after the channel was choked by sand in the Middle-Ages. This channel provided a vital link between Bruges and the sea. This drawing can however be interpreted differently: a ghostly city bled from its inhabitants who fled for fear of flooding.

Khnopff shared Albrecht Rodenbach’s view: like Memling’s statue swallowed up by the waves, the city, entirely dedicated to art, will be submerged and overcome by materialism, the artist’s soul drowning in the philistinism which paralyses mass tourism and fashion. But the absence of the statute, mysterious but explicit, can also be viewed as a symbol of alienation and desolation, while evoking the idea of the omnipresence of death, the unavoidable end of all being, doomed to disappear in an unfathomable emptiness (from Dominique Marechal, in catalogue 'Fernand Khnopff (1858-1921)', Brussels, RMFAB, 2004, p. 39-40, 230-231)