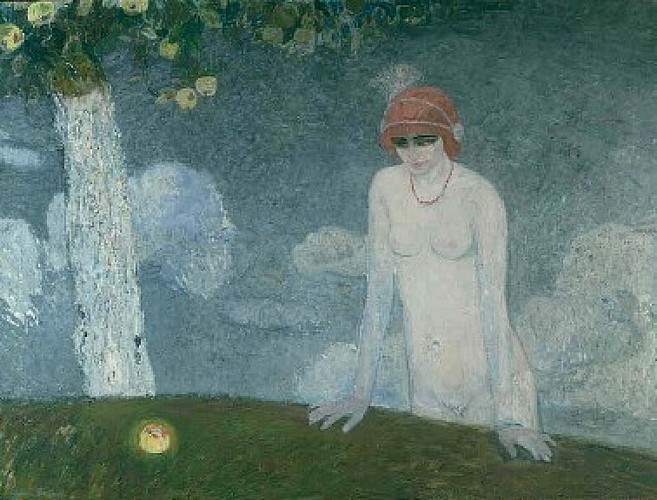 A naked young woman leans on a green slope, looking at a glittering apple. Nearby, the apple tree stands out against a cloudy grey sky. In his detailed monograph dedicated to De Smet, Piet Boyens sees the apple as the symbol of temptation and seduction, the apple tree as the tree of knowledge, and Eve’s attitude, encompassing the Earth in an all powerful gesture, the incarnation in one single person of the struggle between vice and innocence.

Eve is the symbol of woman as instigator of evil. Even though it can be thus in De Smet's universe, we feel that this interpretation does not stand for this work. If one only takes into account the make-up, the jewelry and the red wig with its feather and flashy tiara, it is clear that Eve belongs to a world in which the concept of innocence has long been reduced to an academic question.

In 1913, when he produced this work and after a long hatching period, Gustave de Smet had become too much of an artist to let one of his works get stuck in the dullness or platitude of the commonplace.

A particular perspective and attitude, combined with an Eve at the very least well informed, who knows perfectly why the apple is sparkling so brightly, these are the elements which allows us to deduct that the artist focused more on the artistic quality of his work than on an anecdotic cliché (from Frederik Leen, in 'Le musée caché : A la découverte des réserves', Brussels, RMFAB, 1994, P. 226-227)