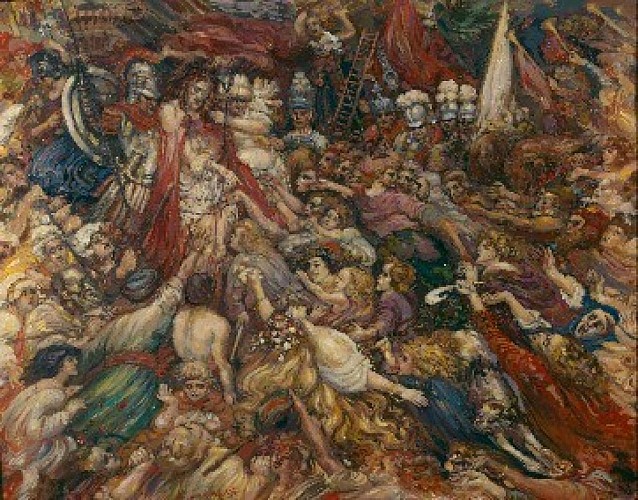 In 1890, Henry De Groux exhibited his ‘Christ aux Outrages’ during the Brussels Fair. His controversial work led to heated debate. Expelled from the group called Les Vingt or The Twenty for his affront of Van Gogh, Signac and Lautrec, De Groux adopted a provocative stance similar to Ensor’s.

This painting was undoubtedly inspired by ‘The Aureoles of Christ’, especially ‘Christ Shown to the People’. As Ensor, De Groux retained the general movement structured by light and a vivid palette. It shows at its maximum potential in the sketch drawn for the occasion.

Haunted by anxiety, Christ stares at the vanishing point of this composition, which annihilates the identity of each body to evoke, through a large blind swell, the brutishness and bestiality of a crowd, which Ensor had reduced to a weaving of light and shadow (from Michel Draguet, in 'Le Symbolisme en Belgique', Brussels, RMFAB, 2010, p. 158)