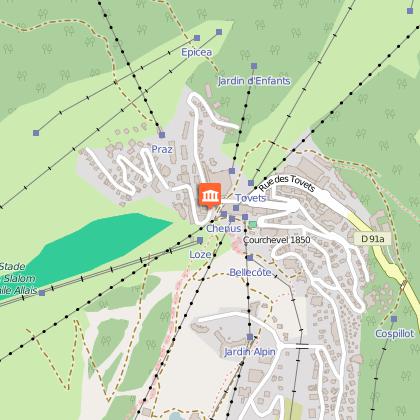 LA CROISETTE (1971)
La Croisette is the resort’s beating heart on which Laurent Chappis based his urban planning project in 1946. Up until the building’s construction in 1971, the snow front was only marked out by the road with parking spaces on one side and ski slopes on the other. The areas were based around this point: Chenus and Plantret to the west and the other districts (Tovets, Bellecôte, Cospillot, Nogentil, Jardin Alpin, Pralong) up to the Altiport to the east.


LE FORUM (1991)
This shopping and leisure centre was originally built for the 16th Winter Olympics in Albertville in 1992. The hockey teams trained on the skating rink during the 1992 Winter Olympics.