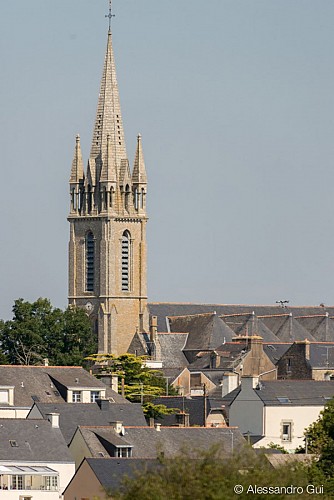 The construction of Saint Pierre Church began in 1863 by Father Gomaud. However, it was not until 33 years later that the structure was completed, finishing with the bell tower. The church was built on the ruins of the ancient Saint Martin du Vertou Church. With beautiful architectural lines and an impressive appearance, the 55-metre bell tower can be seen from neighbouring parishes. Inside, the choir is outfitted with remarkable woodwork, an enormous high altar and organ loft made by the Debierre workshops in Nantes.
Go back up to Place René Mulot. Here, you are in front of the Les Halles marketplace.