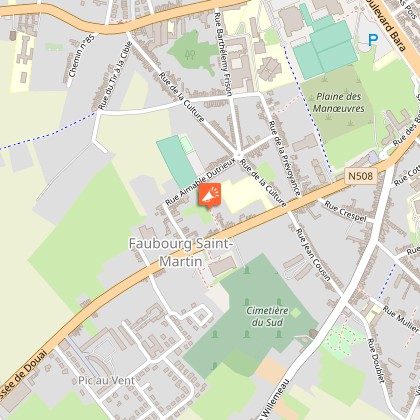 “With the 400 Coups, I concert. Do you ?” An improvised orchestra, giant mind-blowing flying bells, 400 concert artists, 400 small harmonised bells, creating a mammoth improvisation, which each time it takes place will be different, thanks to the participation of very talented soloists. Data : 2 August, Mouscron (as part of the Kick-Off of the 400 Coups, 3 o'clock, townpark) ; 9 August, Antoing (6 o'clock, Ile de l'Escaut); 15 August in Chièvres (6 o'clock, Main square) and Leuze (6 o'clock, Saint Peter Tower); 16 August in Obigies (6 o'clock, Rue Frayère) ; 12 September, Comines (6 o'clock, Chemin de Moulin Soete); 13 September, in Tournai (as part of the Grand Finale, 5 o'clock, Main Square). Discover the programme on : www.400coups.eu. One of the activities that will be taking place as part of the “On fait les 400 Coups, et vous ?” (we’re painting the town red, are you ?). “Next door” to the Mons area, Picardy Wallonia is a region which is naturally an official partner of the “Mons 2015, European Capital of Culture” series of events ! Picardy Wallonia will be “painting the town red”, in conjunction with Mons, from 2 August to 13 September 2015. Everyone will let their hair down, be daring, get buzzing, be charming, with as a theatre the sky, which mirrors an out-of-the-ordinary and surprising part of the world ! Part outing into the sky, part spectacle put on by Ath’s Giants, part spending the night under the stars, part genuinely wacky concerto you can take part in, with all sorts of flying and chiming bells. In total, a dozen or so events involving the sky and thirty or so other events have been planned – experience them in the open air, in Picardy Wallonia’s towns and countryside, in fields, in a forest, in an urban centre, a church, a château, from a waterway, a part of the sky, wherever.