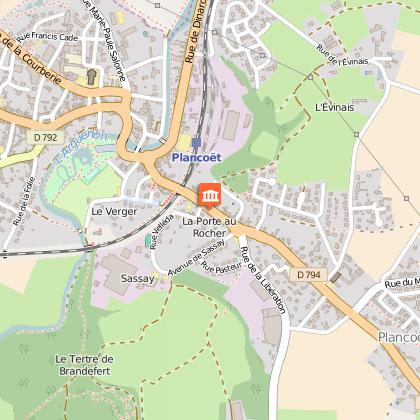 In Rue de l'Abbaye, you go by, at n°43, Chateaubriand's grand-mother's house.
You will be able to get a better view once you crossed the protected rue de Velléda.
"If ever I saw happiness on earth, it no doubt was in this house. (...) Madame de Bedée didn't walk anymore but apart from that she had none of the inconveniences of her age. She was an agreeable old woman, plump, white, clean, tall by looks, of beautiful and noble ways, wearing antique pleated dresses and a black laced headdress tied below the chin. She had an ornated mind, grave conversation, serious temper. She was being taken care of by her sister Mademoiselle de Boistilleul, whom looked like her only through her goodness. (...) My grand-mother counted on her sister for the care of the house: she dined at eleven o'clock in the morning, slept for two hours after her diner; at one she woke up, she was caried to her garden where she took the fresh air surrounded by her sister, her children and grand-children. At four she entered her salon, a gaming table was placed; Mademoiselle de Boistilleul knocked with tongues on the chimney plate, and a few moments afterwards we saw entering three other old maidens who exited the neighbouring house at my aunt's call. These three sisters of whom the youngest was fifty-eight years old, were called demoiselles Ville-de-Neuf. Daughters of a poor gentleman, instead of sharing his small inheritance, they enjoyed it together, never left one another, and never left their father's village; bound since their childhood, they lived next to each other, and came everyday at the agreed signal through the chimney, play a game of quadrille with their old friend. The game started, these old ladies quarelled. It was the only event of their life and the only moment when the equality of their temper was altered; at eight supper brought back serenity.' (extracts from Memories of my Life)