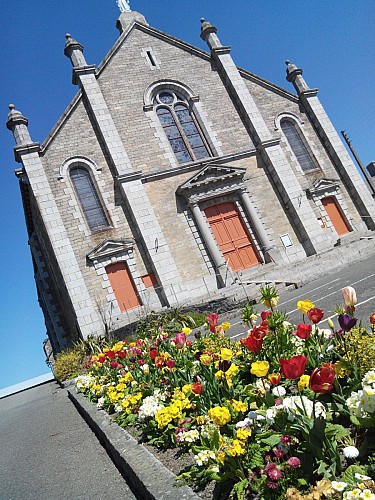 This church is one of the reasons for the young Chateaubriand's coming to Plancoët.
His parents, having lost a newborn before him, decided, after a difficult birth; which followed him all his life, to take him to Nazareth.
"I came to this world on [4th October] in the year [1768]. (...) [The] house is situated in a small street of Saint-Malo, called Rue des Juifs. The bedroom where my mother gave birth dominates the deserted walls of the city, and look on a sea spreading as far as the eye sees, breaking amidst the reefs; I had as godfather my poor brother and as godmother Madame the Countesse of Plouër, daughter of the Marshal of Condates: I was named François, after the day I was born, and René because of my father. I was almost dead when I exited the motherly breast, and the roaring of the waves beaten by an equinox tempest stopped my cries from being heard." (extract from Memories of my Life)
"I was placed to a nanny in this lovely village of Plancoët. (...) The only brother of the mother, the Count of Bedée, had by this village a much agreeable castle he had named Mon Choix. The goods of my maternal grand-mother were nearby. My grand mother herself lived retired with her sister, Mademoiselle de Boistilleul in a hamlet that was only separated from the village of Plancoët by a bridge and which we called l'Abbaye since a Benedictine abbey was consacrated in this place to Our-Lady of Nazareth. (extract from Memories of my Life)