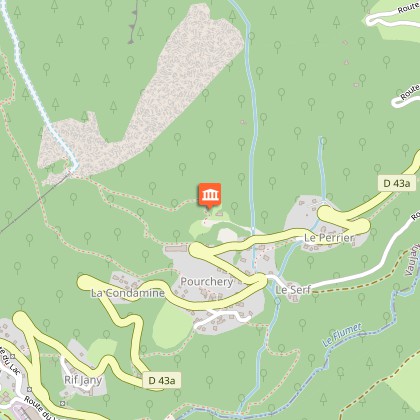 The first hydroelectric schemes into the mountain.

The first hydroelectric schemes dug into the mountain to accommodate the turbines.
In 1908, the first private hydroelectric power station of the Compagnie de l'Eau d'Olle was installed at Le Verney. The men went down to the factory to work. As the standards were not the same as today, some were electrocuted. It was not uncommon to come across someone with an amputated arm or leg. It was only in 1946 that EDF was created. Before, in the family farm, there was a light bulb in the living room, above the table, and another in the stable. The factory would close down, and switch the power to the inhabitants. There were no switches. Meters did not arrive until the 59/60s, leaving some people grumbling about paying for that light halo. The pipe that carries the water to the hydroelectric plant. The water comes from the Grand Maison dam, named after the Grand Maison which was buried when it was impounded. It passes through the mountain. Then it is regulated at the balance chimney, and finally sent to the EDF plant and ends its course in the Verney lake. A particularity: the water of the lake of Verney is "re-pumped", passes again in the mountain and finds its initial lake, that of Grand Maison. EDF spends electricity to pump the water, an operation that turns out to be surprising! Why spend electricity for an unnatural manipulation? Simply because the gain from passing it on again is greater!