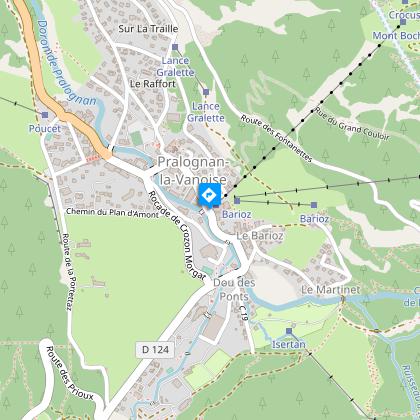 To round off your scenic outing, the Mont Bochor cable car takes you up to an altitude of 2,010m in just 3 minutes! At the top, you’ll find an orientation table at an altitude of 2,023m, on the promontory of Mont Bochor, with 360° panoramic views over the Vanoise glaciers and peaks! In summer, this is also a start point for a range of hiking and mountain bike trails.
The history behind the Bochor cable car is a fascinating one! In the olden days, when our ancestors had to cross the mountain ravines, they used ropes on which makeshift gondolas were pulled along, carrying timber or livestock. This system was the precursor to our modern-day cable car! And this is how, in 1951, construction began on the very first service cable car for transporting tools and materials up to Mont Bochor. Timber posts supported the cables on which the cable car would travel. In 1952, the cable car was finally inaugurated after a challenging construction period, and its landmark maiden flight as it were took place that 31 December. In February 1953, it was finally commissioned: at the time it was the fastest cable car in the world!Facts & figures at a glance:Altitude of the bottom platform: 1416.50mAltitude of the top platform: 2002.50mElevation gain: 586mLength: 1086mCourse: 1048mJourney time: 207 secondsMax. slope gradient: 92%Average slope gradient: 66%10 trips an hour32 passengers per car170,000 journeys in winter
Open in the winter and summer.
Find out more in the guide Destination de légende : le téléphérique du Mont-Bochor (in French): https://fr.calameo.com/read/0010480179e1abe5e2695