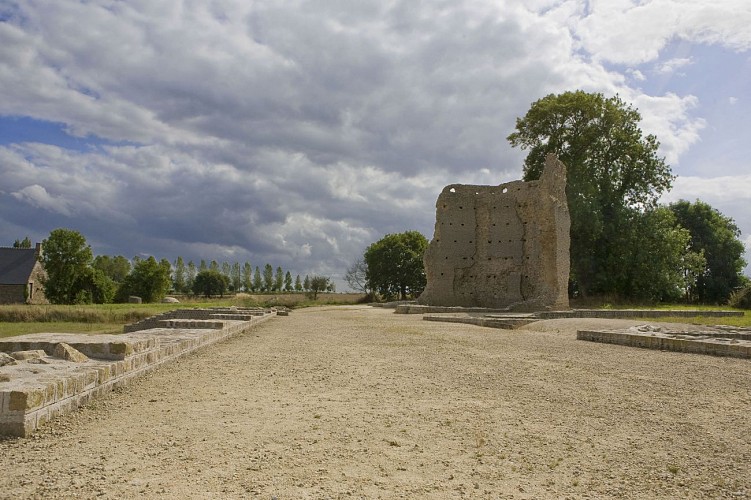 Stay on the same sidewalk for about 250m (after the castle). You can see the layers of the old Roman road. Take on the right the path to Trégouët Abbey, and climb the hill up to the Temple.
On this hill, the largest Gallo Roman sanctuary of Brittany stands.
Created ex-nihilo, this monument appears as a tool to serve the integration of the local populations and shows the dedication of the Coriosolites city to the Empire. Its construction, based on the size and the cost, was in two stages and on a few decades between the end of the 1st and the beginning of the 2nd century AD. The Romano-Celtic building, facing east, is organised around a vast sacred courtyard covering 5,000m² (108m x 98m). and is surrounded by three raised porticoes. It is said to be Romano-Celtic since it uses, in its architecture, a polygonal cella (most sacred area of the sanctuary) in Celtic tradition, associated to the Greek system with three porticoes, the whole linked with the Etrusco-Italic constructions through its frontality. The columns are in the Tuscan style, very puridied Roman architectural order.
One entered the sanctuary through the vestibules which allowed to host, control and guide the pilgrims. The sacred area could hold around 5,000 people. The processions and calls of the Emperor representatives took place under the porticoes.
The octogonal cella, (tower originally 22.50m heigh) of which four walls still remain, was the most sacred area of the sanctuary, reserved to the sacerdos (priests) and the elite. The cella housed the tutelar deity's statue, Mars Mullo. The pilgrims couldn't access this area.
To pray to the god, they turned in the adjoining gallery and left their offerings to the God in a small exedra.
The sanctuary was destroyed by fire, most likely between 275 and 290 AD. Voluntary fires caused during pillages by Saxon pirates going up the Rance River, or by peasants revolts against imperial power and social order. Many a building, public or private, walls or enclosures, of the area has been built with the stones from these ruins.
An interpretative itinerary in free access shows you the life of the sanctuary.
Slip into Gaius' mind, our mascotte, and let yourself be lead into the pilgrim's ceremony!
Go around the site and retrace your steps to CORIOSOLIS.