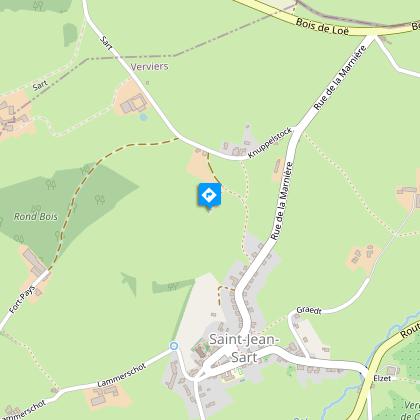 Using the ordnance survey maps of the IGN (National Geographic Institute), the panorama that the walker sees has been sculpted in a 1.5 metre diameter blue stone, with additional bronze details. The whole sculpture weighs more than a ton. This orientation table represents in relief the exceptional panorama that can be seen from the site making it readable by hand, thus also accessible to the visually impaired. Originally, the group “Quality Village of Saint Jean-Sart” had the idea to install a simple wooden orientation table. Eight years later, the project had evolved to be what can be seen today: an orientation table unique in Belgium. There were numerous organisations associated with the realisation of this work : “Qualité-Village-Wallonie », the Community of Aubel , the Institute of Eco-Pédagogie as well as the Laboratory “Surfaces” of the University of Liège The construction of the actual table was the work of Betelgueuse, a collective of artists from Anthisnes. This would not have been possible without the financial support of the Walloon Region, the Tourism Commission and the Community of Aubel.