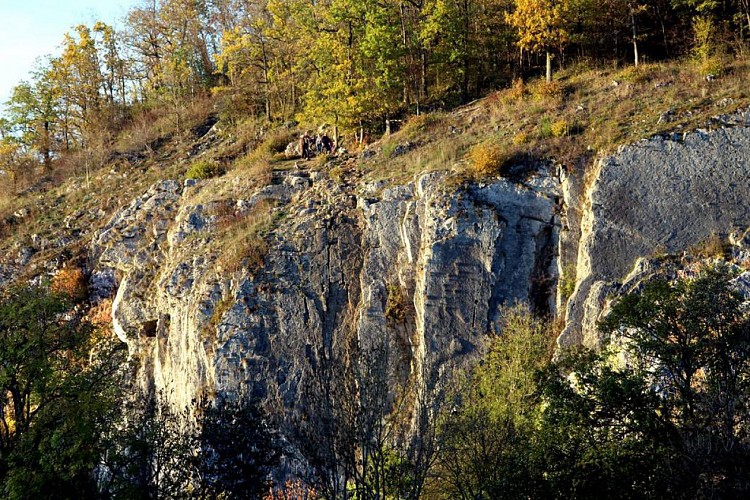 On the heights of the Renissart Rocks once stood the Roman camp of Ti-Château, covering an area of 1.7 hectares. From this strategic vantage point, the garrison was well placed to keep a watch on the River Ourthe and stand guard over the farms clustered below. A number of coins and gold artefacts dating from the days of the Roman Empire have been discovered on the site. Close by is the Trou Fré Djame (Brother William’s hole), a feature standing 20 metres above the Ourthe and named after a monk said to have lived there as a hermit long ago. The feature consists of a corridor beneath a rock arcade that cuts right through the rock, providing protection for a 5-metre long rock platform. The smooth surface of the passage and its virtually circular cross-section indicate that it was formed by limestone dissolving (karstification) and represents the remains of a former karst system nowexposed by erosion. Traces of Neolithic remains have been found at the site. The Rochers de Renissart geosite consists of a limestone massif with karst cavities that rises above the Ourthe, facing south. The site is of great interest on many fronts, as part of the landscape, geologically, biologically, archaeologically and historically, not to mention the leisure opportunities it provides. Some sections of the rock are suitable for climbing, and very popular with climbers in the Geopark. A total of 102 climbing routes are available to members of Belgian climbing clubs. A climbing guidebook can be purchased from the tourist office (syndicat d’initiative)in Hotton. The beach at the foot of the rocks is ideal for spending a relaxing day by the waterside.